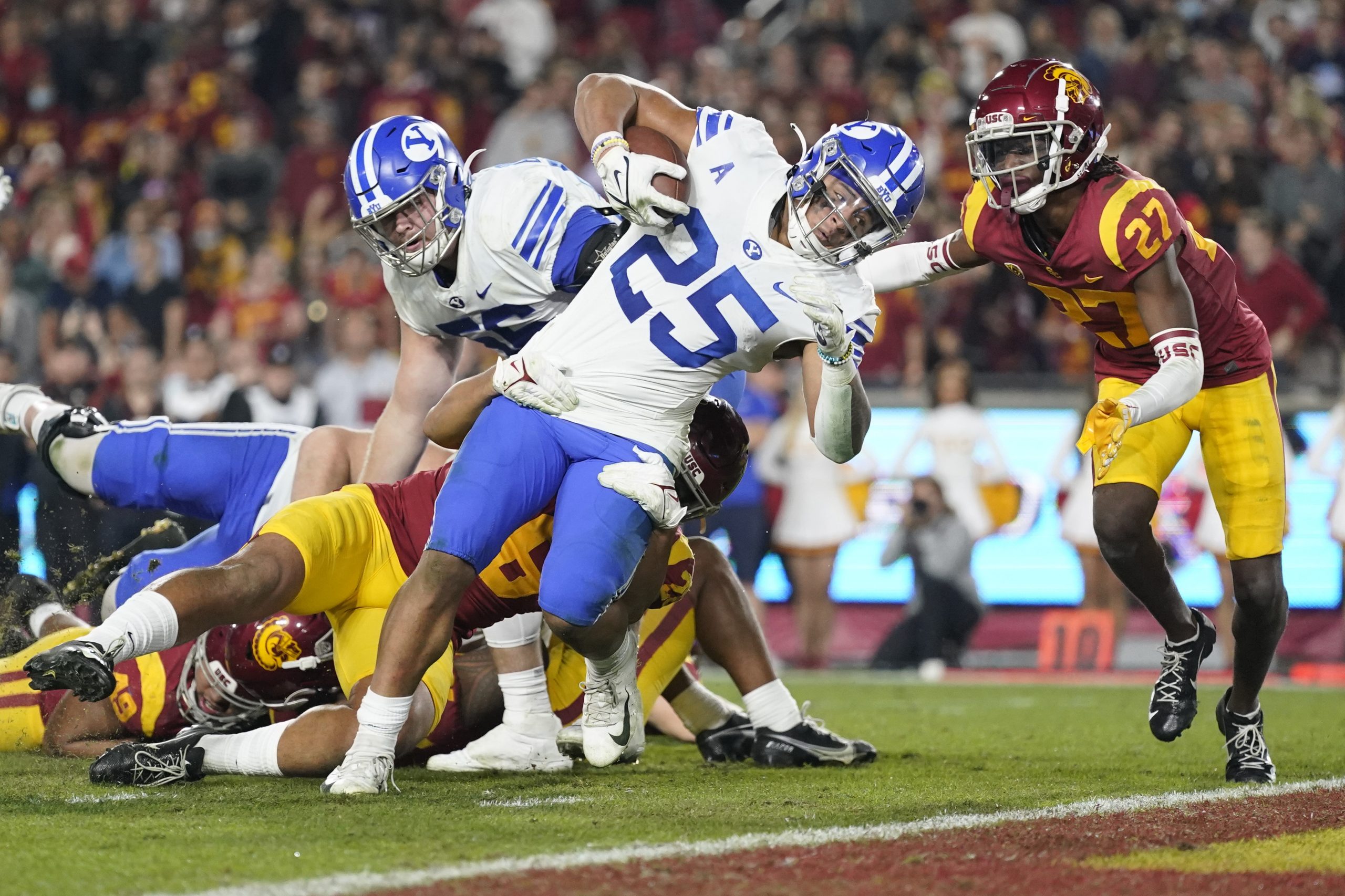 Brigham Young isn’t used to having to rally from behind, yet the 13th-ranked Cougars were able to come back after blowing a 15-point lead in the second half against Southern California on Saturday night.

Jackson McChesney’s 7-yard TD run with 3:57 remaining and a red zone stop during the final minute propelled the Cougars to a 35-31 win over the Trojans. BYU (10-2) had a 15-point lead in the third quarter, but USC scored 18 consecutive points to take the lead.

“We just stuck to our basics and got the energy back. Once we were able to do that, it came together well and it was an easy march down the field,” said quarterback Jalen Hall, who completed 20 of 32 passes for 276 yards with two touchdowns and two interceptions.

BYU trailed 31-28 with 11:03 remaining after Jaxson Dart’s 10-yard touchdown pass to Gary Bryant Jr. and 2-point conversion. The Cougars drove down to the USC 39-yard line on the ensuing possession, but Hall was picked off in the end zone by Calen Bullock.

BYU forced USC to go three-and-out, and got the ball back at its 38 before going 62 yards in six plays, culminating in McChesney’s TD.

USC drove to the BYU 15 in the final minute, but Bryant came up a yard short on a pass from Dart on fourth-and-6 and turned the ball over on downs with 38 seconds remaining as Kaleb Hayes made the tackle.

“It was looking pretty bad, but once we regained our composure, I was confident we could come back and get the win,” BYU coach Kelani Sitake said. “USC was bringing a lot of physicality to the game. We had a bunch of guys chip in.

“We knew we were going to get USC’s best shot. There was a lot for them and us to play for.”

Tyler Allgeier rushed for 111 yards and a pair of second-quarter touchdowns for the Cougars, who went unbeaten in five games against Pac-12 teams this season.

USC (4-7) saw its bowl hopes dashed after dropping five of its last six. Dart was 23 of 45 for 248 yards with a touchdown passing and rushing.

“We created turnovers, ran the ball, controlled the line of scrimmage but at the end we made one too many mistakes,” USC interim coach Donte Williams said.

The Trojans trailed 28-13 early in the third quarter after Keanu Hill caught a 41-yard touchdown pass from Hall that was just beyond the outstretched left arm of Trojans cornerback Isaiah Pola-Mao before coming back with scores on three straight possessions.

Vavae Malepeai started the rally on the ensuing drive with a TD on fourth-and-goal. Malepeai — who had 99 yards on 20 carries — ran right, bounced off an attempted tackle by BYU linebacker Max Tooley and scored from 2 yards out.

Parker Lewis’ third field goal brought the Trojans within five points before they took the lead on Dart’s strike to Bryant.

Both of Allgeier’s scores came in the second quarter as BYU led 21-13 at halftime. USC’s lone first-half touchdown was on a 5-yard keeper by Dart. His knee appeared to be on the ground while fielding the shotgun snap, but he didn’t have possession of the ball.

Sitake was assessed an unsportsmanlike conduct penalty during the third quarter for arguing on the field after a punt.

“I lost my cool. It was not my best moment, but every coach wants to fight for their guys,” Sitake said. “I’m glad we got the win. It was a lot of fun.”

BYU: Not only did the Cougars go unbeaten against the Pac-12, but they were 6-1 against Power Five teams this season.

“I can’t control what people think about our schedule. People didn’t think it was tough enough last year and those teams are playing well,” Sitake said. “People assumed this was going to be a rebuild year, but guys seized the moment when they got their opportunity.”

USC: This was the best the Trojans have looked during the second half of what has been a disappointing season, especially after a 62-33 loss to rival UCLA last week.

USC: Travels to Cal next Saturday for its season finale. The game was rescheduled from Nov. 13 due to a COVID-19 outbreak in Cal’s program.